So, I'm late with this, I know, I have been working nights in RL and not had a great deal of spare time for blogging, but as soon as I saw this Halloween meme from Berry, I knew that I wanted to do it. Halloween is my absolutely favourite holiday, even more so than Christmas. In fact, if I had to choose between the two, I'd cancel Christmas for Halloween everytime, lol. For me, Halloween is about having fun and celebrating with family, which is totally what Christmas should be about, I know, but Christmas is so over-commercialised and really puts too much pressure on my already tight budget that I really do not enjoy it anymore. Anyways, Berry asked us to dress up into our favourite halloween costume, so here is mine, very much inspired by one of my favourite movies; The Corpse Bride! Can you believe this movie is 20 years old??! 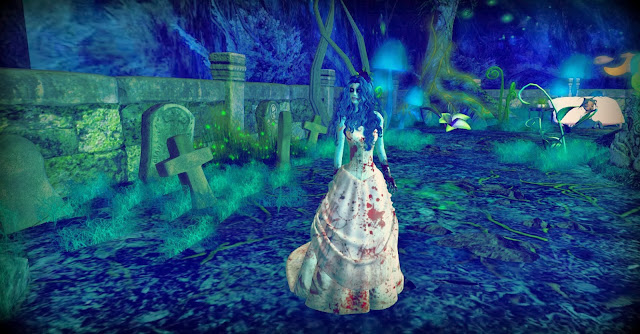 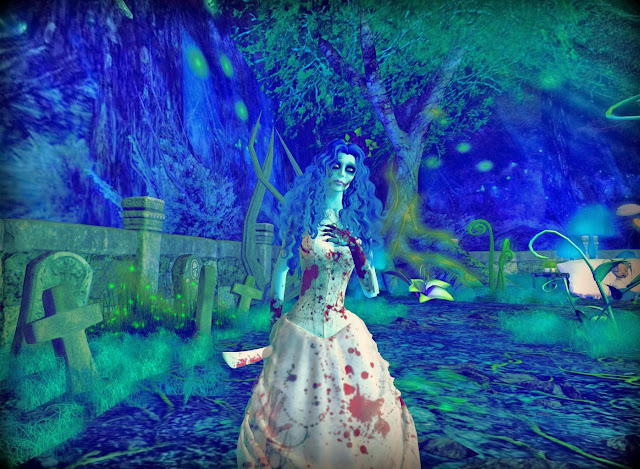 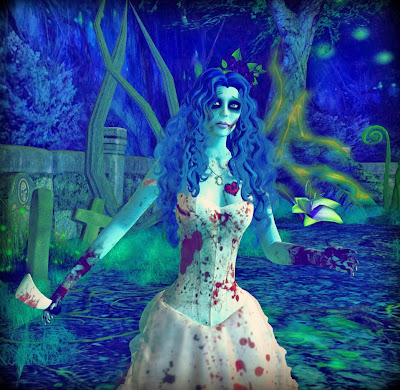 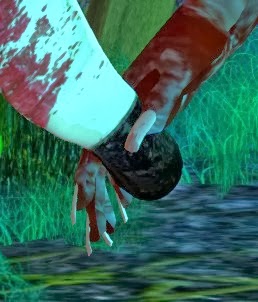 In true MeMe style, Berry had a series of questions she wanted us to answer, so here they are.

Did you go trick or treating as a child? I don't really remember going Trick or Treating as a kid tbh. My mum was a very strict Christian and believed that Halloween was an evil festival, Satanic even, so she strictly forbade me from Trick or Treating. I remember looking at all the other kids' dressed up in their spookiest costumes and having fun and feeling sooo jealous of them. I have made up for this now though, since growing up and leaving my mothers' house, I have totally gone mad with celebrating Halloween, and love to dress myself and my kids up and go Trick or Treating.

What is your most vivid memory about Halloween? My most vivid memory as a child was simply not being able to join in, sadly to say :( I do remember dressing up as a witch at one point though, but I think this must have been for a school disco or something.

What is the scariest movie you have ever seen? Me and my husband are HUGE fans of horror movie's, although I admit, I do spend most of the movie hiding behind my pillow too scared to look at the screen, LOL! When it comes to picking the film that scared me the most, I have to admit that Asian horror movie's get me EVERY time. I dont know what it is about them.... maybe how they don't use music to build up to the scary bits, they just happen right in your face and you don't have time to hide behind your pillow!! It is almost impossible for me to pick the one movie that scared me the most, so I'm going have to say there were 3. The original Asian version of The Ring - "Ringu", the original Grudge movie - "Ju-On" and the original Thai version of Shutter . One thing all these films have in common is that they are ghost movies, and I'll be honest ghost movies freak me out, whether they are Asian or British/ American!!

Are you superstitious? If so, name at least one superstition of yours. I'm not particularly superstitious as such, I am way too rational thinking to let some silly superstitions bother me, however I am afraid of looking into mirrors! I think this has come from years of watching horror movies other than being superstitious about them though!

What will you be doing for Halloween this year, if anything, in SL and RL? Same as we do every year; decorate the house, dress myself and the kids up and go out Trick or Treating (in RL). When we are done Trick or Treating, we then head home and put on a family-friendly 'scary movie', such as The Corpse Bride and tuck into the candy we have received. This year, we also went to a number of Halloween parties in our costumes, baked spooky cupcakes and biscuits, and generally had a good time! We didn't carve a pumpkin this year though.

Hope you all had a fun and safe Halloween!! Here's my styling info;